You have no items in your cart

In May 2011 concept artist Colin Williams travelled from the UK to Ghana for 6weeks, to soak himself in Ghanaian culture sites and sounds before embarking on a drawing and painting marathon. He was painting right up to the hour before we had to leave for the airport.  So what was he drawing ?

Colin came to join a motley crew of graphic artists, my 9 year old son and me Akua (producer & writer) in Accra in Ghana to help us create an animation. We all shared a dream to bring to life the Asante legend of  the immoveable sword of Okomfo Anokye, the greatest Okomfo (indigenous priest) of Akan ever !

Okomfo Anokye along with his friend Prince Osie Tutu are credited with bringing together the 7 disparate clans of Akan and creating the now famous Asante people of Ghana. Anokye united the clans under 2 symbols, the golden stool he conjured from the heavens at a public durbar (a gathering of Kings Queens and the public) and the sword he thrust into the ground and proclaimed 'immoveable'

Once united the Asante people defeated their long time enemy of the Kingdom of Denkyira then went on to  fight the British in 7 wars from the 18th to the start of the 20th century. 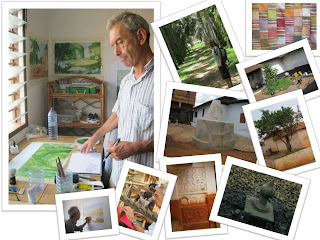 In 1900 the British governor to the Gold Coast called a Durbar, in front of the gathered Kings Queens and population he demanded that the Golden Stool of Asante be surrendered to him. He wanted to present it to Queen Victoria as a footstool. This request incensed the gathered people and a grandmother  and Queen Yaa Asantewaa I gathered an army that fought the British for the 7th and last time. The Asante lost the war in 1901 and became officially part of the Gold Coast, but Okomfo Anokye's Golden Stool and Immoveable Sword were never surrendered. Our story was about the life of the Anokye and Osei and the defeat of Denkyria after the uniting of the clans of Akan. It is the typical heroes journey full of adventure, betray and of course victory. This story was why Colin was now in Accra, the young artists had already started working on characters and interiors for our Anokye animation. Colin was here to paint the concept background locations. his theatre design background was what the production needed. Our dream was an ambitious one to create West Africa's first feature length 2D animation. And work began in earnest. We loaded my car with the artists and embarked on several tours of Anokye relevant sites in Asante and Akuapem region of Ghana.

We visited Kumasi, went to the actual sword site in the middle of a hospital, The Asante King's Palace, various Shrine houses and the University of Kumasi's botanical gardens to a stream  that legend says that Okomfu Anokye created for some people that he and Osei Tutu moved there after the war with Denkyira. We went to Aburi to see the magnificent giant shrine of Lartey before getting to Awukugua to see the childhood home of Okomfo Anokye and talked with Nana Yaw the priest who lived there and took care of the Shrine house. 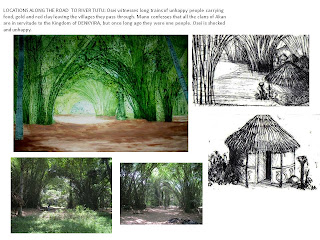 As soon as we came back to Accra work began. The character artists, Hanson, Brown, The black Monk and Nanahene began drawing at a furious pace. Colin drew lots of ink drawings of various spaces, then worked up some of these into settings. We all talked loads about the visual language of  Ghana and the Ghana we wanted for the film.

I had decided a couple of years before to base all the characters on real people, so the photos  were given to the artists, but we needed a consistent artistic style so Hanson drew all the heads,  Nana Hene drew the bodies. Here's a video of Hanson discussing his favourite character, whose face is based on my brother in law Nii Okai Evans, actor & BBC voice over.

The whole process of character and back ground drawings took about 3 months Brown and Hanson moved in for a while and worked what seemed like round the clock at times, with The Black Monk sometimes camping out on the sofa. Sleep was a prised a commodity in those days and I think all of us got Malaria at different times because of over tiredness.  Seren (my son) kept us entertained and loved every minute of having so many artists around. Brown drew and painted all the props. I hired a lady to cook and clean as the house was so full that I couldnt manage it all. breakfasts and dinner times felt like a canteen. I was also running my bag manufacturing business from the same address. the sitting room was now a factory, 1 bedroom was a studio. the veranda was our sitting room. but it was wonderful because it was like we were building something awesome.

All the time this was going on I was finalising the script, the award winning Bristol based playwrite Edson began work on the script. And I began to recruit animators. we carried on working like this for serval more months to complete a model pack for our south African potential co producers. they were going to come up with the required millions it would take to produce the animation. They had the studios, the contacts and the experience. All we had to do was a lot of preproduction that would unlock the production  finance that would turn the story of Anokye into a feature film that we hoped would be distributed by Disney worldwide.

A well known South African animation director was keen to work on the film and his 'near' attachment made the whole enterprise seem like it was all just a matter of time before we would be walking down the road at Cannes film festival to board a yacht full of adoring fans .

We finished the model pack and delivered it to South Africa, by this time all money had gone into the project. The artists and I had already been working almost a year. We needed the South Africans to sign off and begin releasing some money so we could grow the crew and I was prepared to move to south Africa. Anokye was my baby and I could feel so many compromises ahead. Anokye was my baby, my vision and my original simple story was turning into a beautiful heroes journey, but  I knew that I would have to keep an eye if we were going to keep the integrity of the story. The reply that came from South Africa floored all of us. They said the characters we were all too humanoid. The international animation public apparently don't want to see human Africans, could we not make them more ...... African mask like ?

It seems that they had never heard of the African animation Kirikou, one of the highest grossing European animations.  We had spent more than £50k to produce the work thus far, and now the gap between us and the South Africans was insurmountable. The trust was gone. We were in shock, but we decided to scale things down and try and get the money in Ghana to continue, but as a crew we had taken a hit to our confidence. We even tried to reach out to the Asante king for support, but our generous 'introductions' person wanted $5k for the pleasure. I even had  brunch with the daughter of a Ghanaian president & good friend of Oprah Winfrey. She ordered half the restaurant only to tell me all about how her her Christian loyalties meant that she couldn't publicly support a film about a traditional African priest.

We limped on for a while but I'll be honest I find film and media people grabby and dishonest. Too many people appeared like jackals trying to steal intellectual property when all we wanted to do was share,  and so for many years the Anokye project existed only on my computer.

But during the 2020 lockdown (Global Retreat) I was afforded the space and time to think and I realised that I met so many amazing people who helped me above and beyond the call of duty and the Anokye project helped many artists in Ghana. One artist I know would not have finished university without this gig, I remember having to go to his university when he finally confessed that he was depressed because his father would no longer pay his school fees. I had to pretend to be a relative before the school allowed me to pay his fees. I remember my best friend taking out a £10k loan so we could continue with the project. So in 2021 it is my mission to bring to life all the art that was rendered during the near 12 years of the making of the Anokye story. We may never recover the £50k we put into it originally. That's hardly the point anymore. The Okomfo Anokye's story is the story of a unity so lasting that most Asante people do not know that we are not a blood tribe, that we are a people who came together because we believed in freedom and autonomy. The Asantes were not even of one religion. Blood and religious identity was not important. What was important was the fight for freedom. This is a story and a way of being that deserves to be told and the beautiful artworks deserve to live a life outside of my computer and have an opportunity to be so much more.

So I've begun with the Anokye colouring book 40 pages of stunning art that you and your family can colour in while enjoying the adventures of Okomfo Anokye.

You can start today by subscribing to our website and we will send you 3 FREE COLOURING PAGES for you to enjoy. If you love them then return and buy the book What an amazing story and thank you Akua for this amazing Animation. Out of disappointment lies great opportunities. I would use the change in the world right now to promote your film. You can Lauch a Fund raising campaign through Indigigo etc. Approach the Arts Council, Net Flix etc. I would not let Oprah Winfrey’s opinion defeat you. This is all the more reason to continue with this amazing film. The only thing standing in your way is Fear. Face the Fear and Do it any. Stand in your Power and let your light shine through.

Interesting how this is the true story of similar pieces of fiction told throughout time like “the sorcerer stone”, or “sword and the stone”…and others…